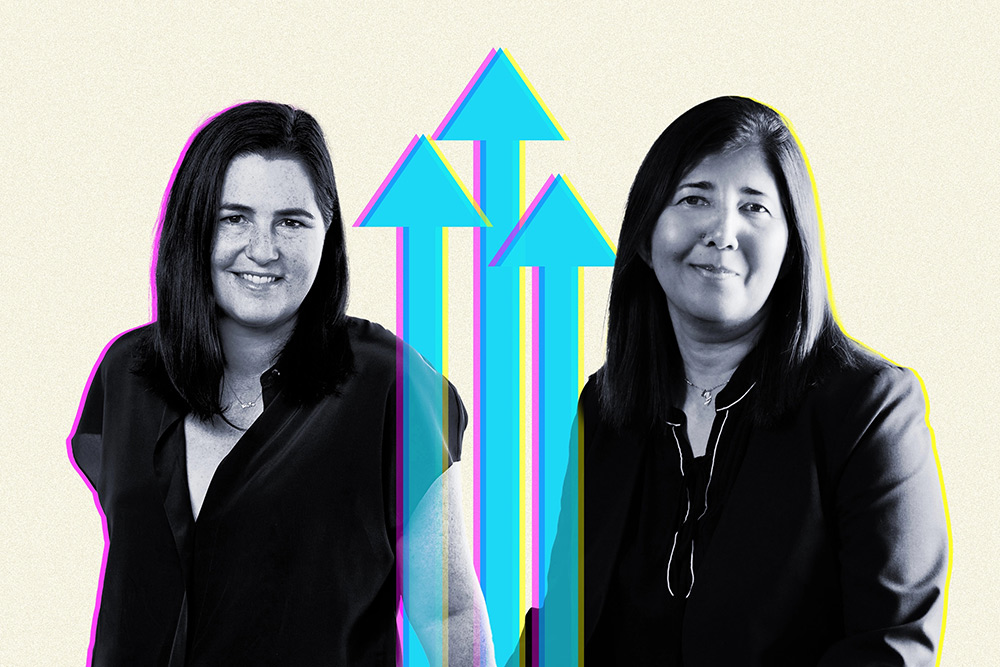 In February 2020, Mandy Ginsberg stepped down as the CEO of Match Group. Her home in Dallas had been destroyed by a tornado, and, shortly afterward, her doctor told her she needed surgery to remove the breast implants she’d received during a preventative double mastectomy; they’d been recalled for risk of cancer.

It was an overwhelming time in Ginsberg’s life, and not how she’d expected to end her 14-year career at the online dating giant. But by her side through it all—and ready to pick up the baton—was Shar Dubey.

Dubey, a longtime product leader at Match, took over as CEO of the Dallas-based, $3 billion tech company when Ginsberg left. It was anything but a typical handoff: Ginsberg and Dubey were best friends who’d worked as an inseparable unit across various jobs and corporations for two decades—so much so that they once tried to pitch Match Group’s board, without success, on a co-CEO structure. “The two people who have had the biggest impact on my life who I’m not related to by blood are my husband and Shar,” says Ginsberg.

Dubey spent two-and-a-half years in the CEO job—handling challenges of her own, including the pandemic and a Texas abortion ban—before stepping down in May. And by then, the pair were ready to reunite professionally. They both joined the private equity firm Advent International as operating partners in October.

Women who make it to the C-suite are often the only one in the room once they get there so very few can claim a friendship of peers like Ginsberg and Dubey’s. Their new roles represent not just the reunion of colleagues, friends, or “work wives,” but the next stage in a multi-decade partnership.

At Match, Dubey and Ginsberg wielded enormous cultural influence—their products changed the way people around the world meet, date, and marry. Now, they’re figuring out how to share what they’ve learned over the past two decades with a new crop of growth businesses as they work alongside each other again.

Rise to the top

Ginsberg and Dubey met at the software business i2 Technologies in Dallas in 2001, during the waning days of the dot-com boom. Dubey had just been promoted to director of product when Ginsberg joined as a marketing VP.

They were around the same age—Ginsberg was 31, Dubey was 30—but came from different backgrounds. Ginsberg had grown up in Dallas. She was a newly-divorced single mother of one who was outgoing and bubbly. Dubey, from Jamshedpur, India, was an introverted engineer, married to a graduate school classmate she’d reconnected with stateside.

Dubey was impressed with how Ginsberg could connect with people and make fast friends. Meanwhile, Dubey shared her analytical perspective with Ginsberg in conversations about their jobs and Ginsberg’s dating life. They became near-instant friends.

In 2006, Ginsberg left i2 to join Match Group, then a small but industry-leading company under the IAC umbrella. Online dating was in its infancy; only 3% of married couples at the time had met online, compared with almost half of new marriages today. Match was launching a second brand, Chemistry, and wanted Ginsberg to run it. Two weeks in, she asked if Dubey knew anyone who could help with product. In an uncharacteristically risky move, Dubey nominated herself—and got the job. “I knew nothing about the consumer internet,” Dubey recalls. “I knew nothing about online dating.”

Atop a small team of 25, the two executives learned the basics of early digital marketing and SEO. They launched a controversial TV campaign that attacked rival eHarmony for rejecting gay members. They later took their partnership to Match.com and another sister company, Tutor.com, later called the Princeton Review.

In 2016, Match Group CEO Greg Blatt called both executives back to the flagship. Ginsberg became CEO for Match Group, North America, and Dubey worked alongside her as president for the region. (Dubey also served a short stint as COO for the Match brand Tinder, turning the platform into a money-making machine.) By 2018, they’d both dropped “North America” from their titles. Ginsberg was CEO of the company, with Dubey by her side as president.

As they bonded professionally, Ginsberg and Dubey also grew their relationship outside of work. They cooked dinner together and went for walks in their Dallas neighborhoods. Sometimes, Blatt would call Ginsberg and ask if she knew where Dubey was—only to find out that the two were on vacation together. They often traveled to Europe with their old i2 friends. Ginsberg filled out Dubey’s daughter Maya’s elementary school applications, arguing that as an alumna of an American all-girls school she understood the task better. When Ginsberg welcomed her second child with her second husband in 2008, she asked whether Dubey would mind if she named her daughter Maya, too.

Ginsberg underwent preventative double mastectomy, hysterectomy, and oophorectomy procedures after testing positive for the BRCA1 gene, which is associated with a higher risk of breast and ovarian cancers. When Ginsberg woke up from her second mastectomy surgery in 2020, her husband and Dubey were the two people sitting bedside.

“A partnership like this is one in a million,” Ginsberg reflects. “Sometimes skill sets don’t overlap. Sometimes companies need different things. We looked up years into it and realized we had something special.”

As Ginsberg and Dubey climbed the corporate ladder together, Ginsberg was usually one rung ahead. According to colleagues, that pattern was a function of the pair’s strikingly different personalities—not a gulf in skill sets.

Dubey defaults to a heads-down approach. On business trips, she prefers to stay in her room and order room service, though Ginsberg often drags her down to happy hour. On planes, she works quietly on her laptop while Ginsberg chats up her seat mate.

Each woman has the skills the other feels she lacks. Dubey has often grounded Ginsberg and helped her execute her vision, while Ginsberg serves as Dubey’s personal hype-woman, prying her out of her shell. Working together has doubled their bandwidth to tackle business challenges. Andy Chen, chief product officer for Glassdoor, worked for the pair at Match Group, and describes them as “heart and head.”

“I’m so envious of this relationship that they have—another super senior executive leader that you can trust that is really honest with you,” he says. “They could push each other and they complemented each other really well.”

When Ginsberg was first tapped to serve as Match Group CEO, she tried to convince the company’s board to appoint Dubey as co-CEO. “Boards look at you like you have 10 heads,” Ginsberg says. “But in our context it would have made perfect sense.”

Both executives say neither would have risen so high without the other. In entrepreneurship, research has long shown that spending time with peer groups of fellow female business owners helps women thrive as founders. But in corporate America, those types of partnerships are exceedingly rare. In 2018, LeanIn.org focused its annual report on women in the workplace on the phenomenon of the “only”—that is, the woman who makes it to the top but has no female peers once she gets there. The research found that 40% of senior-level women reported being the only female executive on their leadership team. Women who were an “only” were 50% more likely to consider quitting their jobs.

The qualities that have historically propelled an executive of any gender to the corner office—decisiveness, high performance—aren’t necessarily those that help one foster workplace friendship. The “type of person who rises to the top” is often not a person who values close friendship at work, says Ann Cairns, chair of the 30% Club, a business group advocating for gender diversity.

Dubey and Ginsberg are exceptions. “People complain that it’s lonely at the top, but I never felt it,” Dubey says.

During Ginsberg’s tenure as chief executive, she worked to defend Match from upstart dating competitors Bumble and Facebook. She prepared Match to spin off from IAC. She oversaw the massive growth of Tinder as it became the company’s top revenue-generating brand. And she presided over a legal battle with Bumble over intellectual property.

She took over from Ginsberg in March 2020, just as the COVID-19 pandemic began. She guided the company through its pivot to remote work and the changing norms of online dating, plus the full separation from IAC, which took effect in July 2020. She became a vocal critic of Apple for what she called an inconsistent application of in-app payment rules.

Even though Ginsberg was no longer in the Match C-suite, Dubey still turned to her for guidance. “At the top, often you can’t have that no-agenda conversation with someone. For me, it was always Mandy who I had that conversation with,” Dubey says.

In September 2021, Texas passed the law known as SB8, which banned abortion after six weeks of pregnancy, a precursor to the nationwide overturning of Roe v. Wade. At the time, Dubey weighed how to respond as the female CEO of a Texas-based company. She called Ginsberg, who helped her decide to set up a fund of her own, rather than one paid for by Match, for employees who needed to travel to access reproductive health care. “The company generally does not take political stands unless it is relevant to our business,” Dubey wrote in a note to employees at the time, crafted with Ginsberg’s guidance. “But in this instance, I personally, as a woman in Texas, could not keep silent.”

The decision made the usually reticent Dubey the first public company CEO to take a stand on the anti-abortion law.

Still, Dubey knew the chief executive role wasn’t one she wanted to stay in for long. “It was never my ambition to be a public company CEO,” she says. She told the board she would stay in the job for a year; she ended up sticking around for two and a half until Match hired Bernard Kim, president of the gaming company Zynga, as her successor.

Frequent corporate restructuring makes it difficult to measure Match’s growth and performance during Dubey and Ginsberg’s tenures at the company. Their first team at the Match brand numbered about 200; today the company employs more than 2,500 people. At the end of 2017, just before Ginsberg took over, Match was a $1.7 billion business; by the time Dubey left, it was earning $3 billion in annual revenue. Its share price was up 143% between Ginsberg’s 2018 promotion and Dubey’s 2022 departure, although that increase measures the stock performance of two separate entities before and after the finalization of the business’s 2020 IAC spinoff.

Once Dubey left Match, she and Ginsberg pondered what to do next. Ginsberg’s career had been cut short by circumstance. Dubey was burnt out from her time as CEO. They had both recently turned 50 and were taking stock of how they wanted to spend their time. They missed each other in their professional lives and prioritized opportunities that would allow them to work together again, Dubey says.

They settled on the private equity firm Advent International, where they will work as operating partners focused on consumer technology. The firm’s investments include Lululemon, the digital bank Nubank, and the haircare brand Olaplex.

If the duo had their way, they would have left Match together, on their own terms. Instead, Dubey stepped outside her comfort zone to become a CEO when her best friend—and her board—needed her. “We’ve grown up together and we’ve grown into these jobs together,” Dubey says. They hope that they can teach the next generation of operators not just to scale their businesses, but—if they’re lucky—to find a partnership like their own. Dubey adds: “Good relationships can change your life.”